if you come to this journal to download stuffs, pls pm or leave a comment here. i've deleted my old posts but most of my uploads link are still alive on my mediafire account (yay)

SMAP has withdrawn from Ongaku no Hi and FNS Uta Matsuri. They're not planning to release any new music this year. As a group they are not appearing with any fellow Johnnys talent. Why does it feel they slowly are distanding themselves? It feels like they are purposely dimming their light. Will they disband or go hiatus once their contact is over in September? Because it feels like that. I don't know much about them, but i hope if they really choose to let go their group name from themselves, at least they would do something like farewell concert. And for once and last, i want to see all of Johnnys with SMAP are on one stage

I was surprised when i check twitter that JUMP is trending worldwide. I thought, '2016 is such a year, what's happening again' ... i clicked on the TT and saw japanese tweets. I didn't understand what was happening until i saw @skysj4 tweeted:

LOL
So the current Japan emperor wants to step down which it will mark the Heisei era and because Hey! Say! JUMP name comes from the word 'Heisei', they started talk about them?

Idk if it's a joke or what but somehow some people were tweeting like "If Hey! Say! JUMP is changing their name, what about 20th Century (V6)", "Even if KinKi Kids are not kids anymore, they don't change their name", or even like "Eventhough heisei era is ending, Hey! Say! JUMP will last long"
So funny XD

Talk about coincidence, today was the released of Masquerade PV Short version too


Thanks for the publicity, i hope JUMP gets more recognized more as a whole group. Yes, the whole group are close and silly and dumb when together :')


Up until i write this LJ, they're still on TT XD 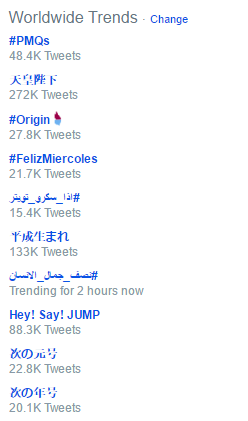 I DIDNT KNOW THIS HAPPENED


Koichi went semi-topless and dancing with AKB (+DAIGO) XD AND LOOK AT HOW ENERGIC HE WAS, LIKE, CALM DOWN OJII-SAN!
But i like it. No, I LOVE THIS *plays in repeat*

When i watched Arashi ni Shiyagare where Haru first came and introduce herself (they hadn't met before, the first meeting between actors would be held later after Shiyagare's recording) on Ohno's corner, I felt "Ah, Haru somehow resembles Nino". I think i commented on certain LJ post but i forgot.
Then this morning i read someone's tweet mentioning that there'll be kiss scene between Haru and Ohno. I was thinking "Wow, isn't she way much younger than Ohno?" because i remember in Shabekuri 007 she said she's 24 years old. Then i googled her bio and just found out.... She has the exact birthdate with Nino! June 17th!

Part of me is being delusional and been saying, "She's compatible with Ohno!" because 1) Ohno is so compatible with Nino  2) I kinda remember Ohno-Nino said both of them probably won't get married unless they meet someone who fit themselves like Ohno-Nino 3) Haru is tall, japanese-like beauty, indoor-type...... Isn't Ohno always interested in tall woman? :P

But there's 11 years gap, Ohno is ~*superstar*~ in his supposed-to-be-married age while Haru is rising actress who's very ambitious (i think. because on S007 she said she actually was offered a role in Amachan as sister/friend, but she rejected it because she believed if one plays as heroine's close acquintance, she can't get the heroine role on next drama).
Well well well, i need to stop being delusional

Yabu was a guest on Chikarauta again this week. Last week he talked about his concern of debut and his presence in JUMP (i prefer to address Hey! Say! JUMP as JUMP instead of HSJ), and this week he introduced JUMP with "Understand in 3 minutes! Hey! Say! JUMP"

"Next year is Hey! Say! JUMP's 10th anniversary since debut. (Last year) we're given chance to be on 24 Hour TV and slowly getting more recognized but aren't there people who still don't know us?
3-fun de wakaru! Hey! Say! JUMP
( Collapse )

This is the first time i post some kind of translation. I hope i don't mistranslate anything ;; I learn japanese gradually because of watching too much variety, and now have just started learning properly from grammar, writing kanji, etc ;;

I wonder why Yabu didn't include introducing himself here (or is his part is deleted?).. And what's with that Daiki's butt?! XD

Hello!
I created this livejournal in 2008 and had posted 300+ posts in this journal, but now i have deleted everything and want to restart to be active writing on livejournal again. Reasons why i deleted them all is because:
1) It's so messy lol the tags, the posts, everything is a mess,
2) And because it's a mess, it's so embarrassing to anyone to read them,
3) Also often i post something that is too personal and... like reason number 2 says: it's so embarrassing to anyone to read them ;;;

I actually wanted to delete this account because deleting each posts manually is so tiring (Dear Livejournal staffs, maybe you should consider the option to delete multiple posts at once), but because of hundreds communities i have joined, i decided to take the tiring road. Applying for multiple comms (moderated and close comms especially) is more tiring ;;;

All the previous posts have been stored on my harddisk using ljArchive for my personal pleasure :) If any of you plan to back up your LJ, i recommend you to use ljArchive. Very easy to use and it backs up everything including the comments too!

Anyway, hopefully i will start livening up this LJ again even though every one has moved on from LJ. It's really quiet compare to how it used to be... 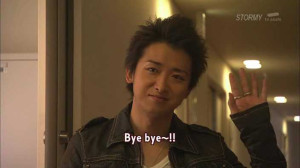